Twin House Architectural Designs, With Concave Exposed Concrete Texture Facades, of these neighboring buildings near Seoul, both designed by South Korean architect Moon Hoon. A huge sphere appears to have imprinted in the exposed concrete texture facades, Architect Moon Hoon, designed the two mixed-use buildings, A “Twin House”- for a site in Goyang, a town located north-west of the South Korean capital. The twin house brief called for one building for the client and a second for his younger brother. The architect took this idea one step further by treating the two structures as twins, with exposed concrete finish facades, that line up with each other. 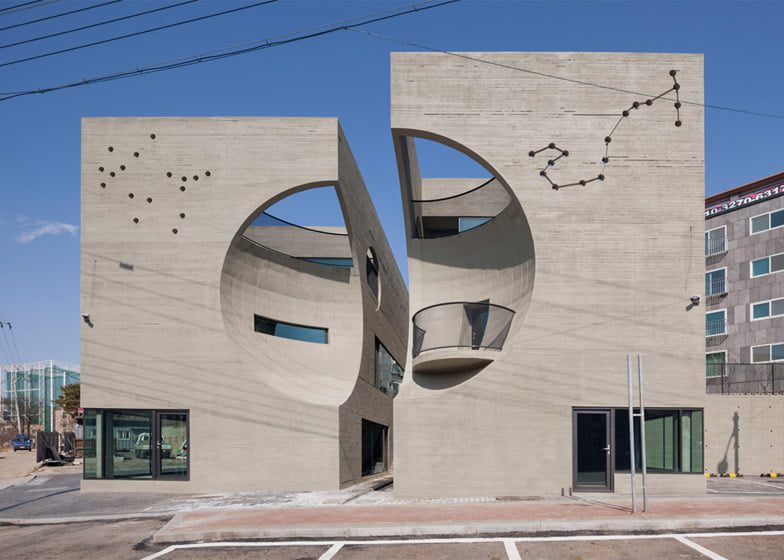 Sometimes, clients bring in a clear idea or a name of a place they envision. This time, a movie named two moon junction surfaced when we first met. He talked about building a private cultural center centered around a coffee shop and a gallery.

This was emphasized with the addition of the spherical recess, which extends across both facades to create two moon shapes, hence the name of the project, Two Moon – Twin House.

A free spirited space, somewhat er0tically charged like the movie, a place full of festivity and relaxed atmosphere. The other important criteria included providing two separate buildings, one for the client, and the other for his younger brother.

The budget was extremely low for this twin house project, so from the start we decided to build simple boxes with some impact points.

The twin house site is an hour drive up north near the city of Ilsan. It is a non-descriptive place, where all kinds of buildings stand alongside, each other without any consideration for each other, industrial, residential and squatter town all mixed up.

Both twin house structures are three storeys high and stand two meters apart. Together they form one venue, but they stand as two separate exposed concrete building. As one building sits slightly forward of the other, these two forms appear slightly uneven.

READ MORE:  Décor trends to leave behind at the end of 2020

This emphasizes the moon appearance, as one side takes the form of a crescent while the other has the shape of its opposite, known as a gibbous.

According to Moon, the starting point for the project was a movie entitled Two Moon Junction, an romantic drama featuring an affair between a college graduate and a man from the local carnival.

The low budget and the movie two moon junction were two major inspiration for the design. Each building has three floors that can be accessed directly via individual staircases, by doing so, common space can be reduced to minimum while maximum can be allocated for rental usage.

The two boxes have an encounter with a large sphere, thus having a distinct concave space that signifies a moon motif. Right one is imbued with a balcony like a lure.

The left one is given a horizontal slit. The other sides of the buildings also have contact points with small sphere, providing depth and apertures.

The irregularities provided by contacts with the sphere are carried into the building to become space with some bulges, a space with some convex. The top floors have outdoor gardens with high walls, but round apertures give much transparencies among much solidified building.

A mini pantheon like domes are also provided on the top floors. The free standing walls on the 3rd floors are punctured with horoscopes representing each client. Welcome back to “ornaments and symbols”…moon and stars!!!

One contains a gallery at ground floor level, while the other houses a coffee shop on its middle floor. The other two spaces on these levels are available for rent, so could be used as offices or event spaces, while the top floors of both buildings are enclosed roof terraces.

There are no staircases inside either building. These are instead located outside in the gap between the two structures, making it possible to open and close various spaces at different times.

The circular motif on the facade is echoed by various window openings around the building. Large round voids allow extra light to permeate the walled-in roof terraces, while a semi-circular balcony sits within one of the curved recesses on the facade.

READ MORE:  How can any organisation ensure proper security at the heart of software development life-cycle systems without any kind of doubt?

There is also a series of smaller perforations on the facade that resembles star constellations. These both correspond to the horoscopes of the two clients. “Welcome back to ornaments and symbols, moon and stars!” said Moon.

Reinforced concrete was the predominant material used in the project’s construction and has been left exposed inside and out. Inside, cement bricks were added to give texture to the wall surfaces.

Electrical cabling and other services have been left uncovered, lending each space an industrial feel that is complemented by black metal balustrades and dark-framed windows. There are also more circles inside – rooms on the middle floor feature domed ceilings. 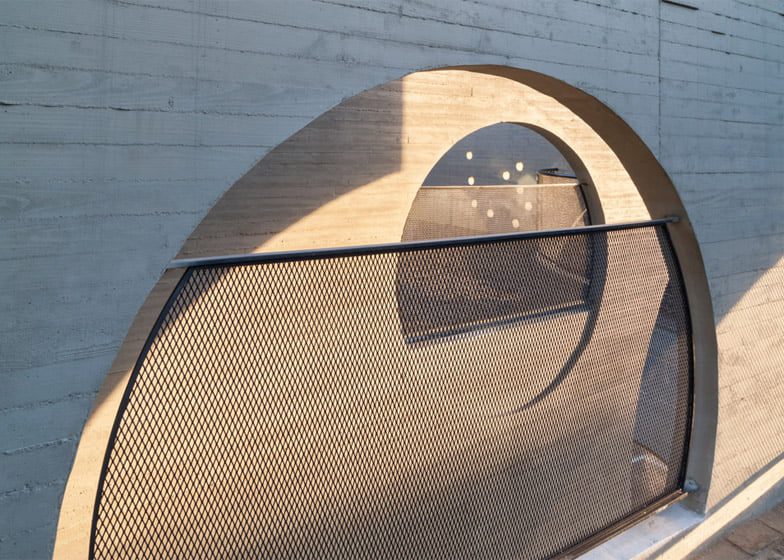 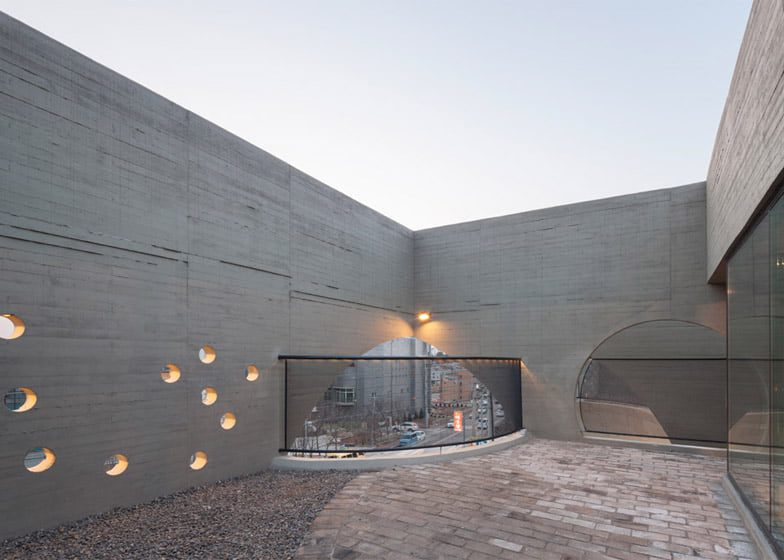 Exposed lighting and services of twin house in south Korea

The architect claims, his design of exposed concrete finish Twin House, here was a response to the incongruous urban fabric. “It is a non-descriptive place, where all kinds of buildings stand alongside each other without any consideration for each other, industrial, residential and squatter town all mixed up,” he added.